Derek Roy has been on a downward trend the last few years, but his numbers indicate he is most likely better than his contract implies.

Nashville was one of the smartest teams this offseason by signing veteran forwards to low-risk, high-reward contracts. Olli Jokinen, Mike Ribeiro, and Derek Roy all signed one-year contracts at bargain prices. While Jokinen and Ribeiro are expected to put up respectable point totals, there hasn't been as much promise for Roy.

The Journey to the Center of the Preds continues...

It's the end of the season, and we've all had time to sit back and evaluate the team. Who made the mark? Who needs to be held back? The answers may (not) surprise you.

His perceived value has declined since he put up 69 points in 2009-10. He hasn't reached 45 points since that season and has struggled with injuries. In that time, he bounced from team to team while finding it difficult to fill an offensive role. While much of this would indicate we shouldn't expect much from Roy, his possession numbers say otherwise.

Last season, Roy was used primarily in a third-line role for St. Louis and excelled in that situation. His ice-time was limited, but he finished the year with 37 points (9 goals, 28 assists). He figures to be a nice piece on the powerplay as almost half of his points came with the man advantage (4-12-16).

His underlying numbers also provide some reason to be optimistic. Roy has finished with a Fenwick for percentage above 50% in all but one season since 2007-08. Additionally, even though his points per 60 of 1.488 last year was his worst since 2007-08, it would have still been good for 7th on Nashville among players who played over 300 minutes.

Roy's numbers from last season show that he can still contribute and help Nashville from a possession standpoint, but those numbers come with an asterisk. His player usage chart is a huge red flag (taken from Some Kind of Ninja). 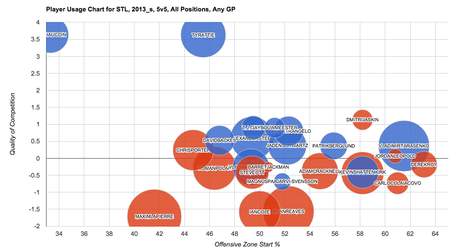 St. Louis had one of the deepest forward groups in the NHL last year. As such, they were able to shelter Roy against weaker competition and easy zone starts. This won't be possible until Nashville becomes a strong possession team, which, although they are trending in the right direction, doesn't seem like it is going to happen this season. They will probably hover around a Fenwick for percentage of 50%, but it won't be enough to shelter players like Roy on a consistent basis. From 2007-2010, Roy's 3 most productive seasons, his offensive zone start percentage was at 50% or higher.

At 31, Roy is past his prime but signing him to a 1 year, $1 million deal was a no brainer. He can still contribute 35-40 points in a sheltered role on either the second or third line and could also prove to be a great asset on the powerplay if he can continue his strong play from last season.

Roy continues his pace from last season and scores around 35-45 points with 15 of those coming on the powerplay.

His injuries throughout the years continue to bog him down and he only manages 20 points. In all, not a terrible situation at $1 million but about as bad as it could get.

Roy excels on the second line while putting up over 50 points. He signs a new 2-year extension before free agency.

Tardigrades have been around for over 500 million years. They can survive 10 years without eating, can live in temperatures both approaching absolute zero as well as above the boiling point, and can survive extremely high doses of radiation. I'm not big on intangibles like "locker room guy" and "resilient", but Derek Roy has fought injuries in the recent past and worked out with Gary Roberts this summer. Let's hope it pays off.