About a week or so ago in the comments section of our Pekka Rinne season preview, (hey, you should go read that by the way) one of our esteemed commenters mentioned how Rinne always seems to play better when he sees more shots. The more the team outshoots the opponent (or the less shots Rinne sees) the worse he plays.

We assume the reasoning is the large quantity of pucks being sent his way gives him more opportunity to get in a groove. However, the logic dictates that being outshot = bad. Sure, Rinne may get used to seeing a ton of rubber, but each puck that gets sent his way increases the chances of the opponent scoring.

We wanted to test if Rinne's save percentage was affected by the amount of shots. The theory we're working with is simple: the more shots, the higher the save percentage should be. For the purposes of this analysis, we are using only games that Rinne started from 2008-2013, and excluding games he was pulled. (Less than 55 minutes.) Eliminating flukey bad starts, or coming on in relief provides a better frame for analysis.

We used a simple linear regression to test the hypothesis that Rinne plays better when he faces more shots. Basically, we are looking to see how well his numbers fit a straight line. If the hypothesis is true, we would get an R squared value close to 1 (meaning it fits a line perfectly). The data is not promising however. Take a look below. 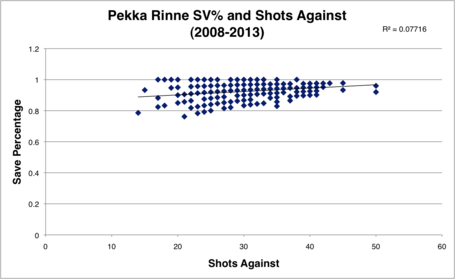 With an R squared of .07716, there is no reason to believe Rinne is better when he faces more shots. Just looking at the data (without looking at R squared), it appears the hypothesis may be correct, but keep in mind that for many of the lower values have only one occurrence, while some of the higher values have multiple occurrences. For example, during this time period, Rinne faced 14 shots once but faced 30 shots 17 times.

Based on work done over at Arctic Ice Hockey, we know we need a sample size of over 5,000 even strength shots to trust our analysis (even more for all situations). With a data set comprised of 7,732 shots (all situations) and 261 games, we can be confident in our results.

Hockey-Graphs has already tested this theory as well, and come to the same conclusion. As recently as a few days ago, Second City Hockey looked at something very similar with Corey Crawford. They found in his case, Chicago's excellent possession game actually bails Crawford out:

So, yeah, a goalie like Crawford is only as good as the defense in front of him. And more specifically, that's directly related to the volume of shots against. This doesn't just mean a goalie who sees more total shots gives up more total goals; the rate at which a goalie stops shots goes down when he's forced to fight off increasingly large numbers.

Like we thought above, generally more shots = bad, and in that particular case it's even worse. Of course, Crawford isn't nearly on the same tier as Rinne is, skill wise, so Predators fans can worry less than Blackhawks fans when their goalie is being pelted with rubber.

Still, while it may comforting to think otherwise, shot volume has absolutely no effect on whether or not Pekka is on his game or not.