Share All sharing options for: Five Years Ago: New Preds Jerseys were leaked 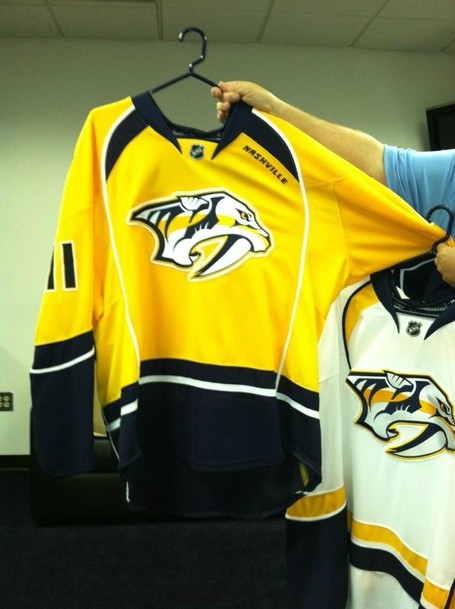 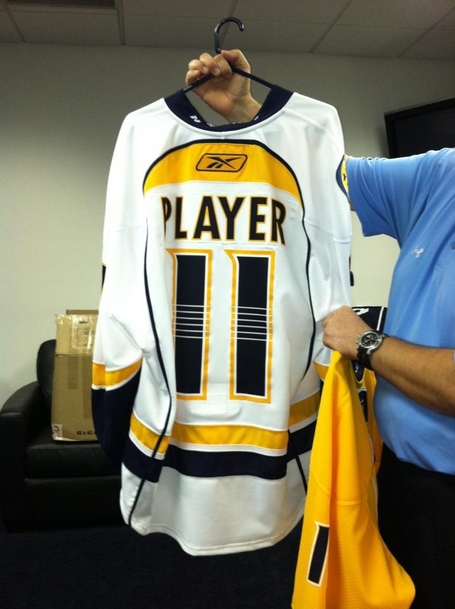 The reaction on Twitter so far has been mixed, but I really like them. They're clean, classy, not too busy, and it's not that god-awful mustard color. The new logo, and especially the shoulder patch look great on the jersey, and I'm a fan of the guitar string look on the numbers on the back.

Again, nothing is confirmed as these appear to be taken with a cell phone camera. This day just keeps getting better, doesn't it?

That was five years ago today (Thanks, Predaceous). It wasn't too long ago when the Preds ditched their blue/silver threads with accents of gold and a hint of orange. Yeah, 1990's uniforms and logos weren't always kind to hockey.

When these were leaked, the poll indicated a mixed but unfavorable reaction. And the comments were nothing short of stellar.

TERRIBLE
Umm really? Would most of you agree that the blue 3rd jersey would have been a much better choice to become the new home jersey and to have the white reverse 3rd jersey become the new away? Especially with how many of the blue 3rd jerseys have been sold and now they want to change to this "gold" home jersey, I don’t like it at all. I was planning on upgrading to the new jersey for this next season but if this is what they are going to look like I’m buying the blue 3rd jersey. It was probably the best looking jerseys the Preds have ever had and we used them for less than two seasons before we change to these. They should have stuck with Blue being the main color of the team instead of changing to "Gold."

Absolute atrocity...
The back is even worse than the front. Great now I have college ruled lines going across the number.
"Hardcore buries head in hands and screams WHY?"
Black and blues to this? What a rip to make a buck, expected better than this.

These are so bad.
Did we just enter the 60s?

I want to burn all the stupid piping
Ok, I don’t hate them all in all. The blue on the gold jersey looks terrible heavy and the white piping makes my stomach roil. The white jerseys are pretty good looking, but the again the piping is terrible, especially on the backs. I truly hoped that we had moved away from the piping nightmares of the early days. Also, can anyone tell me why there are white lines across the number? WHY? What does it add to the design?

Keyboards? Guitar Picks? 6 Strings on the numbers?
What are we, 12? Color scheme is ok, but enough with the Music City crap. YES, THIS IS A TEAM IN NASHVILLE. But I thought the goal was to be a regional team.

Over at PuckDrawn
Someone pointed out the saber-tooth detail at the collar.

(Most of those in quotes are contributors here or elsewhere)

Yeah, some of us really hated these. Keep in mind that these uniforms were to be used as the home jerseys instead of the cherished Navy/White thirds. Those were some swell hockey jerseys, I tell ya.

Five years into the re-branding, how do you feel about the look of the beloved local hockey team?