So this was a discussion in a previous thread, and had a friend work up a wallpaper with some of the better pictures I could find online of our favorite defensemen. Ladies and Gentlemen, I give you the Four Horsemen of the Apocalypse:

The Four Horsemen - Link to save the image if you wish, friend made it 3840x2160 for 4k desktop wallpaper, should work great for lower resolutions too. 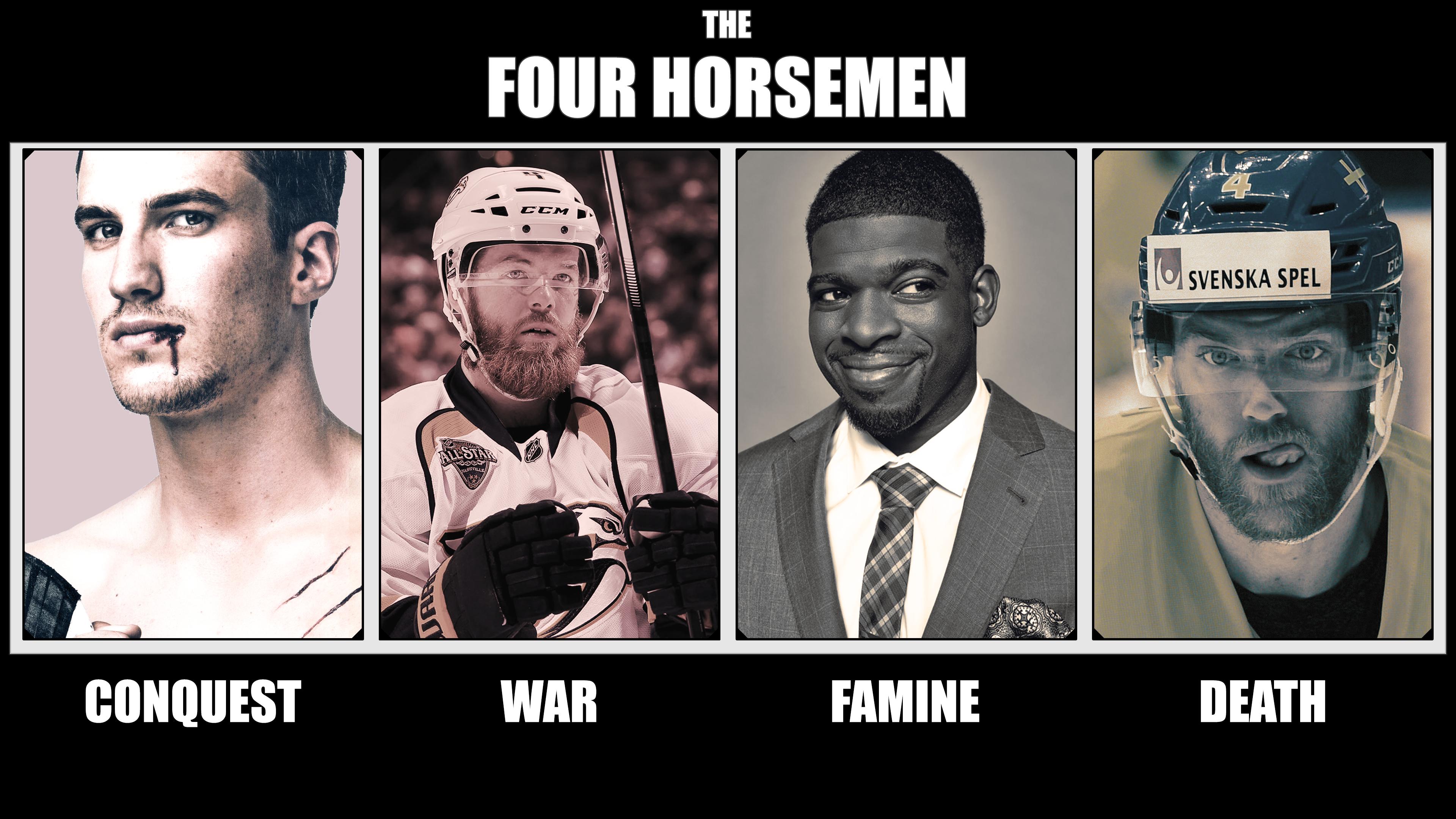 I I'll give you the reasoning with how I decided who was which rider!

"Then I saw when the Lamb broke one of the seven seals, and I heard one of the four living creatures saying as with a voice of thunder, "Come." I looked, and behold, a white horse, and he who sat on it had a bow; and a crown was given to him, and he went out conquering and to conquer."

Out of the our current Defense corps, Josi has worn the "A" the longest, therefore the crown.

And he conquered Karlsson alright.

"When He broke the second seal, I heard the second living creature saying, "Come." And another, a red horse, went out; and to him who sat on it, it was granted to take peace from the earth, and that men would slay one another; and a great sword was given to him."

Hard to fight a war when you are upside down.

"When He broke the third seal, I heard the third living creature saying, "Come." I looked, and behold, a black horse; and he who sat on it had a pair of scales in his hand. And I heard something like a voice in the center of the four living creatures saying, "A quart of wheat for a denarius, and three quarts of barley for a denarius; but do not damage the oil and the wine."

Some of the media up north would have you believe P.K. Subban is locker room famine. Nonsense. He's famine to the goalies with his puck moving ability and slick moves.

"When the Lamb broke the fourth seal, I heard the voice of the fourth living creature saying, "Come." I looked, and behold, an ashen horse; and he who sat on it had the name Death; and Hades was following with him. Authority was given to them over a fourth of the earth, to kill with sword and with famine and with pestilence and by the wild beasts of the earth."

Ekholm is time and time again one of our premiere shutdown D-Men. When he's on the ice, it's often death to the opponent's offense.

He also puts the other team's arguments to death when he tells them to check the scoreboard.

Questions, Comments Complaints? Post and discuss below, just glad to be of service!