If I shoot the puck 10 times and score 1 goal, but you shoot the puck 10 times and score 2 goals, your shots are better than mine. We might even say they’re worth twice as much -- since they score twice as many goals. For goal scoring, you’re more of a Pappy Van Winkle’s Family Reserve (20 year) and I’m more of a cheap mouthwash. (I was going to make a Listerine joke here, but we all know Listerine is among the finest of rinses.)

Now, the issue of shot quality is a difficult, complicated, debated topic with a lot of factors that can be considered, but we can start with the concept of three filters on shot attempts: the shot can be blocked, can miss, and can be stopped by the goalie. Blocks, misses, stops.

When I looked at this for teams as a whole, the primary pattern was that the Predators were #7 in the league at shot attempts, but average at actually getting those shots in the goal. Put differently, the only reason the Predators were able to score more goals than average is because they shoot more than average. The question now is:

We start with a Corsi/60 at 5v5 strength for the good guys. 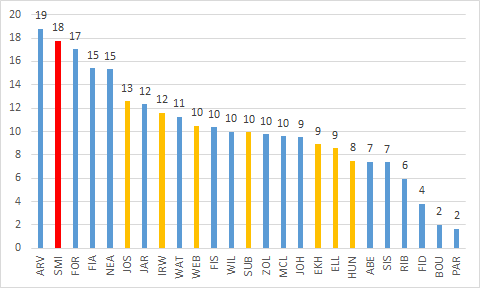 Figure 1. Corsi per 60 minutes of ice time all situations (defense in "gold")

(All data is from a play-by-play database from Corsica. TOI is from DTM About Heart.)

No surprises at #1 with the (Little) Big Vic and Scoresberg at #3. I was somewhat surprised to see Smith at #2. We can predict, since Smith was not exactly a 30-goal scorer this year, that he will have some issues with the filters.

Spoiler: he does; he soooo does.

Right behind Fiala and Neal is a defenseman: Mr. Handsome/60 himself, Roman Josi. In fact, Josi puts a lot of shots on net, more than anyone else on the entire team at 5v5 other than Arvidsson and Forsberg. (His TOI brings the /60 down.)

Moving past Corsi, how does each player do with Blocks, Misses, and Shots?The measure will be the proportion of each player’s shots that is blocked, misses, or stopped. We want all shots to be goals, and so a lower portion being blocked, etc., is better. 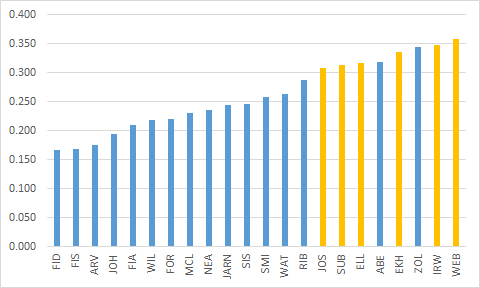 Figure 2. Proportion of shot attempts blocked for each player (defense in gold).

Defensemen clearly are blocked more than forwards, almost certainly because of the distance from which they shoot. On the opposite side, it’s the old center’s club with Fiddler and Fisher leading the pack, followed by Arvidsson, Johansen and Fiala. We can speculate that Fiddler and Fisher are going for the dirty goals. It’s less clear if this is the same for Arvy. Of the forwards who saw substantial time, we find Smith and Watson at the bottom. 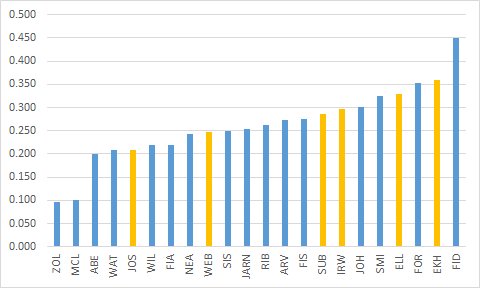 Figure 3. Proportion of unblocked shots that miss the net for each player (defense gold).

The top of the list for those who miss the net is seemingly the reverse of those who are blocked with Harry Z , Mcleod and Aberg at the top. However, all three of those shot relatively little, so it’s not clear if too much should be put into that. One quite intriguing item, however, is that, while again the defensemen are near the bottom, Josi is right near the top, even over forwards. Josi gets blocked the least of the defensemen, and it’s always on target. On the other end with a high proportion of misses, the locations of Forsberg and Smith are notable. 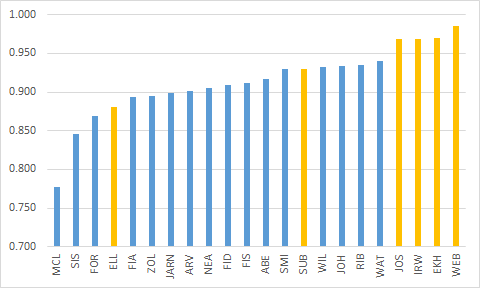 Figure 4. Proportion of Shots on Goal that are stopped for each player.

Finally, looking at shots on goal, we have McLeod (seriously!) at the top, but that’s again because he shot rarely and is usually going for a dirty goal. After that, we see Sissons, Forsberg, and Ellis. Ellis stands out among defensemen for Stops the way Josi did for Misses. Putting the two together, we have a picture of Josi as very consistently putting the shot on net, but those shots not being particularly dangerous. Ellis’ shots are.

Forsberg’s case is interesting as he is simultaneously among the worst forwards for missing the net, but one of the best for getting it past the goalie. I can only speculate now, but possibly he is trying to make a really good shot, one that hits just the perfect corner, rather than simply tossing it at the goalie’s chest. Those perfect shots can go awry.

So far we have looked at the details, but it might be useful to have a summary number across all three filters. To create this, I simply did a weighted average. I started off calling this Efficiency. Then, I switched to "Finishing Power" off of a suggestion from PredHead. In the end, though, I think we can call it TCB. Your Taking Care of Business number.

Which Predators take care of business? 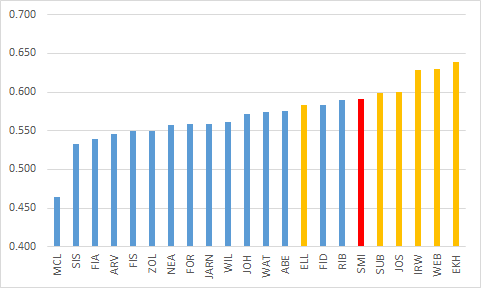 Figure 5. TCB for each player

Yep, the Highlander took care of business. However, he had less shots than he had games, so let’s ignore that. The next names are comforting to see: Sissons, Fiala, Arvidsson (hands off Colton, Vegas!). Sissons took a shot less than almost every forward on the team, but his TCB indicates that he should put pucks in the net with greater opportunity -- which we appear to have seen in the playoffs. Fiala scored highly on every single filter, reflected in his total TCB score.

He was second on the entire team at taking shots, but he has the worst TCB score of any forward. What I cannot say with TCB, however, is whether it’s predictive. Does Smith’s low TCB score indicate he’s a poor shooter and is unlikely to improve, or does it indicate he was snakebit this season and should move back up next year? A similar argument goes towards the good TCB numbers for Sissons and Fiala.

One final note is that shots from the defense are less likely to succeed. With the exception of Ellis who is in the middle, defensemen pack the lower end of the TCB chart. Ekholm shot 230 times for just 3 goals. (Gah!) I expect that this is normal for defensemen, but it brings up concerns with our defensemen taking so many shots. It suggests we need traffic in front and someone ready for a rebound to handle those shots from the blue line; otherwise, they could be wasted. (Don’t think about who scored the final goal of the SCF.)