Wait...is he the Preds’ first or fourth best defenseman?

It doesn’t seem that long ago that we witnessed Mattias Ekholm’s sentencing to the “Barry Trotz Doghouse” as a defensive liability. But, look how far he’s come now. This past season, the 26 year-old Swede led all Predators with 1,924 minutes of total ice time. To give that a little perspective: that is only 50 minutes less than Shea Weber recorded in 2015-16.

On the other hand, after a breakout offensive season in 2015-16, Ekholm’s output saw a decent decline this season as he posted only 3 goals and 20 assists in 82 games (a 12 point decrease from the season before).

Regardless, Ekholm used this season to establish himself as an elite shot-suppression defenseman with strong puck-carrying abilities.

As you can see above, Ekholm’s offensive generation remains slightly above average. However, his shot suppression skills (the “SHOTSUP” column) are elite compared to the games’ best blueliners. This is certainly not a new development. However, Ekholm spent much of his season paired with P.K. Subban as seen below (and almost all of the playoffs), and this shot suppression was on full display as the two became Nashville’s shut-down pairing.

Although Ekholm is frequently hidden from the spotlight behind Josi, Subban & Ellis, this season, especially the playoffs, highlighted Ekholm as Nashville’s most adept defensive player. As seen below, his Even Strength Defense far exceeds his teammates while playing the most minutes, and he is excellent as limiting shots from high-danger areas. 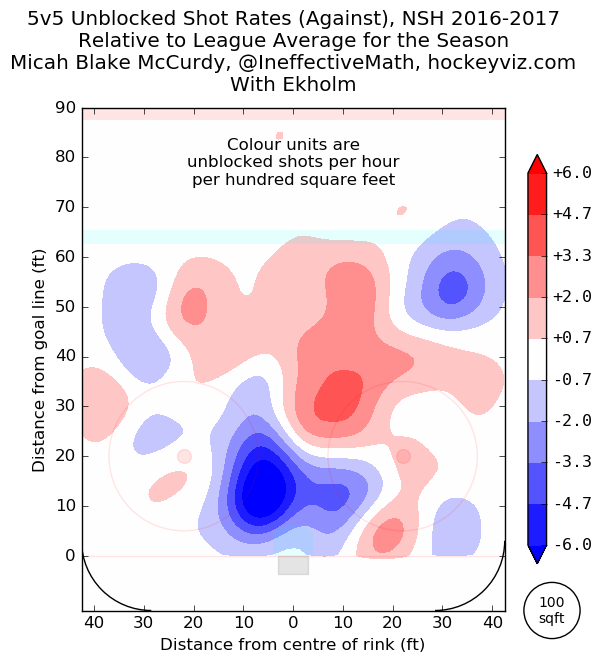 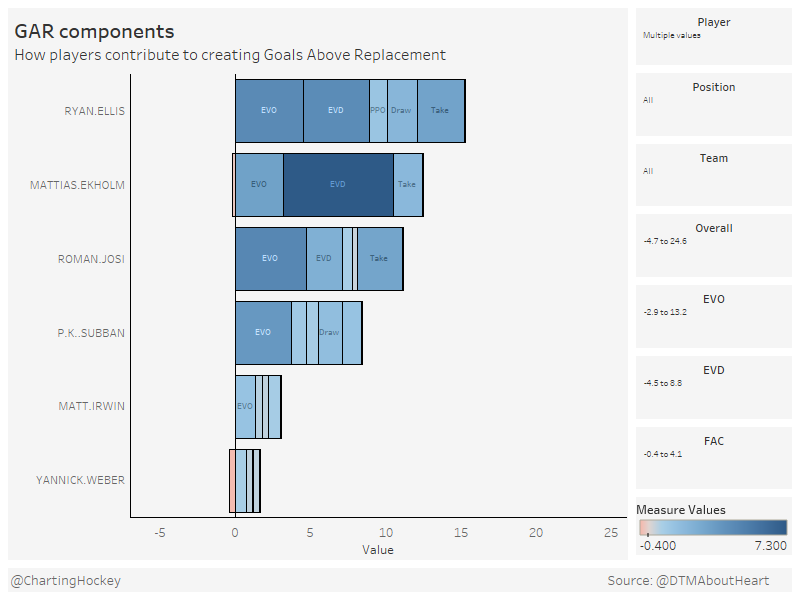 Ekholm has become the perfect defenseman to anchor Nashville’s up-tempo defense and flourish alongside elite offensive players such as Subban.

While there is no doubt that everytime Ekholm drops his shoulder and drives the puck into the offensive zone, often going behind the net to set up a scoring chance, his best moment of the season comes elsewhere. When things got chippy during Game 5 of the Stanley Cup Final, NHL.com picked up a great exchange, in Swedish, between Ekholm and former Predator Patric Hornqvist.

More from the raging Swede vs Swede war. Below is the transcript of the Ekholm/Hornqvist scrum from game five. https://t.co/m97kQyqI5D pic.twitter.com/tRjj2XT1zv

There has to be some joy found in the Stanley Cup Final and Ekholm is just keeping it real.

While Ekholm often shined throughout the playoffs shutting down opponents’ high-end players, he was the subject of some hiccups here and there. None was more crucial than in Game 1 of the Stanley Cup Final. After a momentum-killing overturned goal, the Predators were subject to an onslaught of the Penguins’ offense. To cap off that horrible first period, Ekholm put one in for the Pens courtesy of his knee.

Obviously, there wasn’t much Ekholm could do here, but this was one of several moments where Game 1 could have gone differently for the Preds and, ultimately, might have changed the series.

Trending Up or Down?

This may not be a popular answer, but Ekholm has likely hit his ceiling. He’s 27 years old and will be 31 in the final year of his contract. The Predators can expect similar offensive outputs and elite defense over the next five seasons but large improvements in play shouldn’t be counted on. If that’s the case, however, there is nothing to complain about. Three to five more campaigns similar to this year will keep Ekholm a strong contributor through his prime.

This poll is closed

Unless noted otherwise, all stats are courtesy of hockey-reference.com.