On October 1, the Nashville Predators announced a trade with the Buffalo Sabres involving two minor-league players. The organization sent defenseman Jack Dougherty to Buffalo in exchange for forward Nick Baptiste.

Below I’ll break down what Dougherty’s departure means, as well as where Baptiste fits in the organization, his numbers and his game tape.

What went wrong with Jack Dougherty?

Earlier this summer, I listed Dougherty at #20 on my Top 25 Under 25 rankings. As many of you may have figured out, just because a player made that list does not mean they are a legit NHL prospect. Dougherty may or may not fall in that category.

As I wrote in that piece, simply put, Dougherty was an offensive and defensive disaster last year. But it was only his second year in the American Hockey League.

Dougherty has always had an interesting slot in the organization. His freshman season at Wisconsin after he was drafted in 2014 was an equal disaster on and off the ice. Then his 52-point season for the Portland Winterhawks in 2015-16 opened some eyes. However, after two years in Milwaukee scoring a total of 25 points in 138 games, it seems the organization felt Dougherty had hit his ceiling. Although once a part of an intriguing d-corps in Milwaukee, Dougherty was by far the biggest liability, giving up over three goals per sixty minutes in 2017-18.

Don’t get me wrong: Dougherty is a legitimate top-four AHL defenseman. His ceiling once upon a time was a depth player in the NHL, likely. It’s entirely possible—though maybe unlikely—that he can become a top-pairing player in Rochester and find some spot time in Buffalo.

But, for Nashville, this is an interesting move. It drops Milwaukee’s roster to seven defensemen, one who is on an AHL contract, but undoubtedly opens up some opportunity for two players in particular: Joonas Lyytinen (who I am very high on) and Filip Pyrochta (who impressed many early in training camp).

Baptiste split considerable time between the NHL and AHL last year, but would’ve finished 9th on the Admirals in points per game among players who skated in 30 or more games. You may be curious as to how many of the eight players ahead of him are on this year’s Admirals roster. The answer: one—Emil Pettersson.

Will Baptiste see 30+ games in Nashville this season? Nowhere close. He is a decent offensive pick-up for the Admirals, who have done a decent job of replacing their scoring from last season but are still on counting on players like Yakov Trenin and Anthony Richard to take the next step. Whether good or bad, the organization has too many potential bubble players—Rocco Grimaldi, Connor Brickley, Colin Blackwell, etc.—to warrant a call-up for Baptiste barring extreme circumstances.

Baptiste regressed significantly from a stellar sophomore AHL season in 2016-17 to last year. However, he took a fair amount of shots per game and suffered from a dismal 8.05% shooting percentage. Take a look at a visual comparison from 2016-17 to 2017-18—if Baptiste is half the player he was two seasons ago this will be a positive for the Admirals: 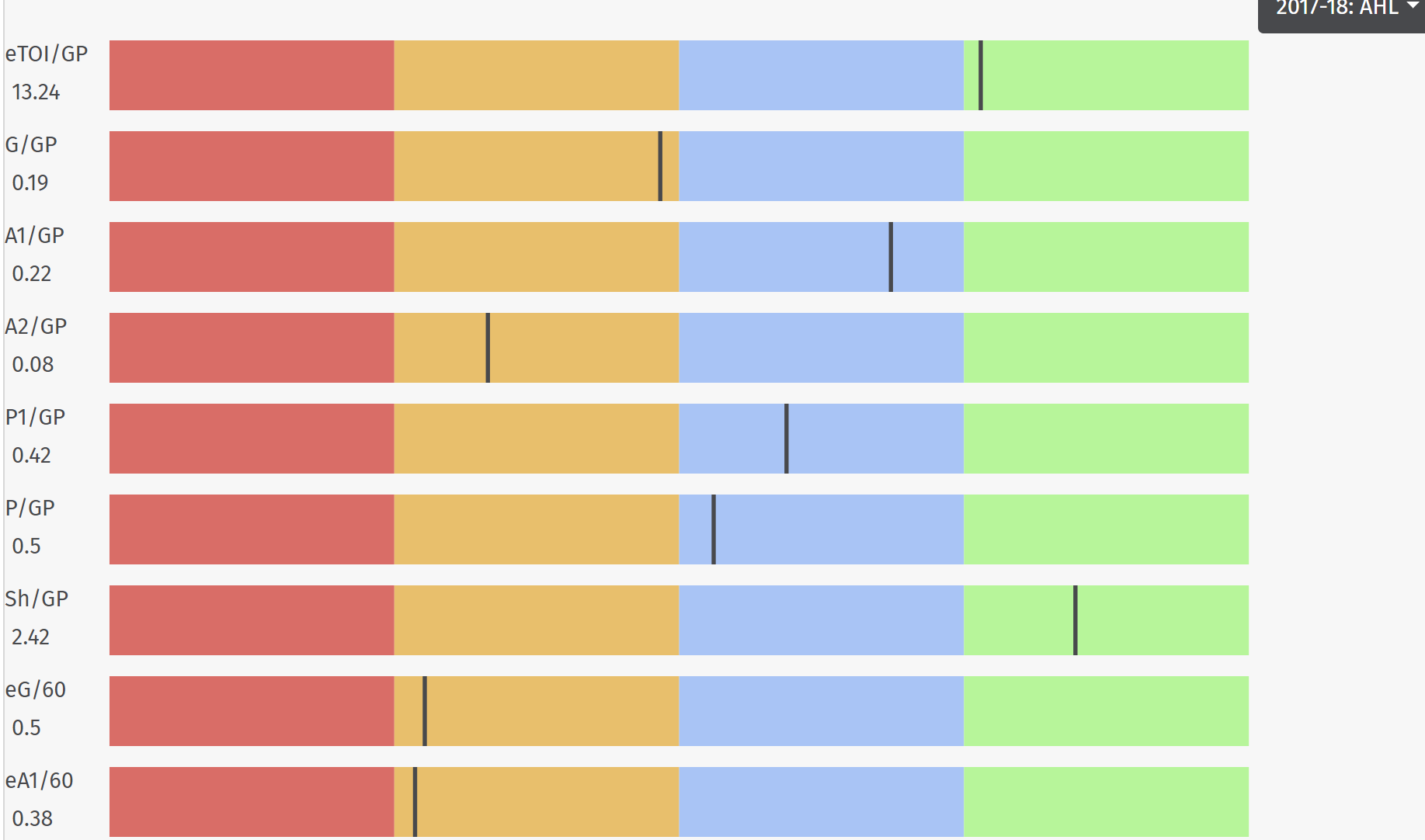 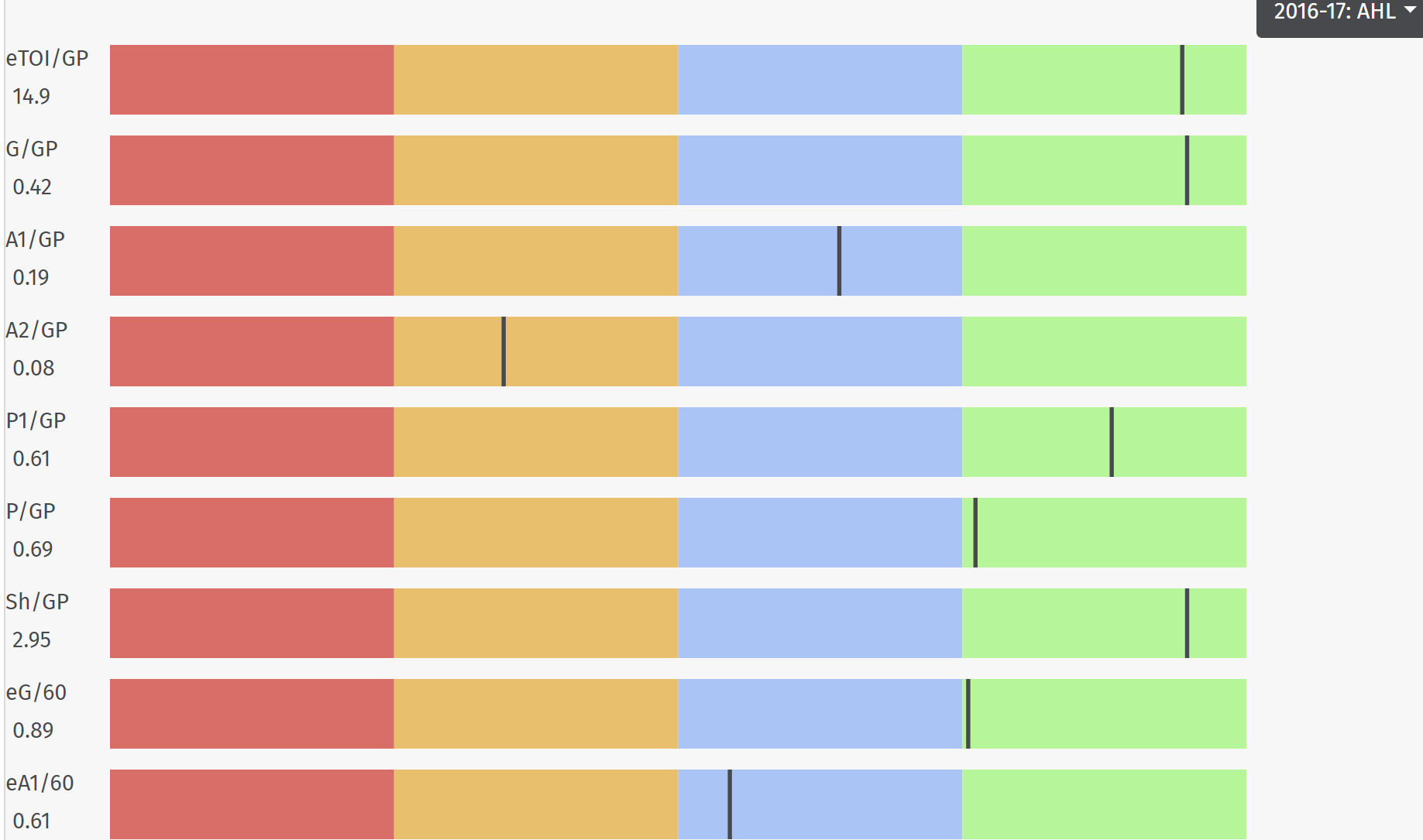 Baptiste (#13)’s NHL highlights from last season are largely unspectacular, but above is a solid assist. He coasts to the net and eventually takes position from the defenseman. He doesn’t get pushed out when attempting a few shots on net, and the Sabres ultimately come up with a goal.

Baptiste has a decent ability of creating his own lanes and finding space to the net. That’s on good display in the clip above.

Baptiste scores a solid PPG here. He does an okay job moving around the circle as the puck rotates up top and buries it when the time is right. This goal isn’t automatic like it may seem in the AHL, and it seems Baptiste was firing to get a shot off there, but another shooter on the power play will help.

Baptiste signed a one-year deal in July worth a $787.5K cap hit. He will earn $70K in salary in Milwaukee and will be a restricted free agent next summer.

All statistics are courtesy of eliteprospects.com. All contract information is courtesy of capfriendly.com.