The 2018-2019 season is right around the corner and while the Nashville Predators roster remains largely unchanged in terms of personnel there are some lineup shifts on the horizon that could give some different looks. Players like Eeli Tolvanen could be ready to emerge while Smith and Jarnkrok hit career highs last season and remain core pieces of the team. Ryan Hartman took a one year "prove-it" contract and will have plenty of opportunities to prove he is worth the cost David Poile paid to acquire him at the trade deadline. The top 4 defense remains the same but a fully healthy Ryan Ellis should boost the unit to even greater heights. Also, Dan Hamhuis returns to solidify the bottom pair and based on his numbers the last couple seasons he could flex up to the top 4 to give the horsemen a rest. As for the goalies, Rinne and Saros (Juuuuuuuuuuuuuse!) remain as possibly the top duo in the league with Saros expected to get a bigger workload in hopes of keeping Pekka fresh for the playoffs.

While training camp is still a few days away and we are yet to learn what the lines will look like, lets draw some conclusions and make some speculations about who will play where and what their season statistics could look like. The lines are effectively what I would like to see to keep some of the current chemistry and as well as creating some new possibilities. To come up with the statistical predictions, I looked at historical goals, assists, and points per game as well as shot rates, shooting percentages and expected goals mixed with a good dose of subjective assumption. 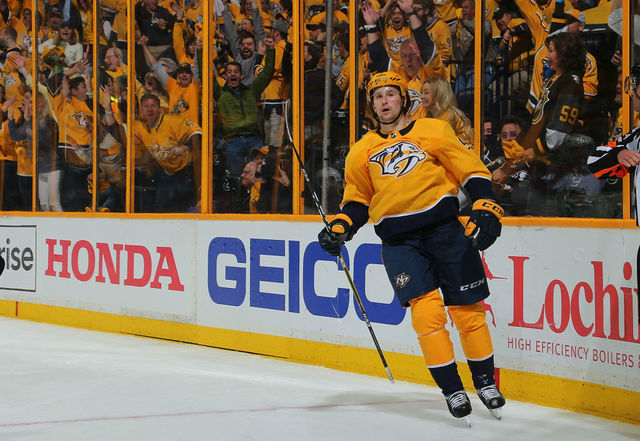 Filip Forsberg reacts after scoring a goal vs the Avalanche

The JOFA line sticks together for another season. They play so well together and complement each other's strengths. Forsberg was scoring at over a point per game before his injury and looks primed to break every single season Preds scoring record. An underrated aspect of this line is that they also take a lot of defensive responsibility.

(Hot take alert - OTF's own ppeterson614 says Johansen and Forsberg will outscore Dallas' Seguin and Benn so let's see what it takes to do that).

This one is a bit risky since Tolvanen is an unknown but the potential is massive given the mix of skillsets. Fiala scored a career high 23 goals and may be the best natural stick handler on the team which creates all kinds of space. According to Corey Pronman, Tolvanen has a top-10 shot right now and he has played all of 3 NHL games. Turris is a strong second line center who can both score and distribute the puck.

(Hot take part deux - ppeterson614 says Tolvanen will hit 25 goals and challenge for the Calder so let's include that one as well).

I honestly love the potential of this group given their various skillsets. Hartman brings size and net front hands, Smith has speed to burn and excellent forechecking while Jarnkrok plays a truly complete game. They all complement each other well and could provide a real boost to the bottom 6. I don't expect Smith and Jarnkrok to hit career highs again but in this lineup hitting their averages is sufficient. Hartman likely spends some time on the power play which gives his stats a boost.

With the setup of the 3rd line, Bonino and Sissons are pushed to the 4th line providing two quality skaters in a depth role. Offensively, Bonino finishes at a solid rate (14.5% in '17-18) and Sissons eclipsed 120 shots on goal last season. Watson will miss some time due to his off-ice situation but assuming he returns he will see the bulk of the games over Salomaki. 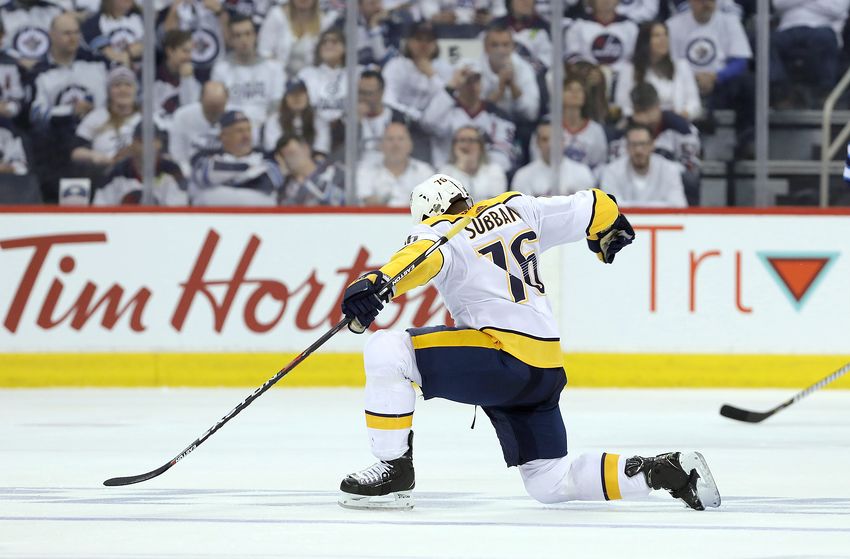 P.K. Subban celebrates a playoff goal vs the Jets

A pairing that has been highly desired by Preds fans but largely unused due to injuries across the defense corps should get another chance this season. These two have such a high talent level and can utilize each other's skills. Playing a full season as a pairing may not result in their highest point totals but could elevate the team around them to new heights.

With P.K. and Roman working together, the Preds are able to bring back a highly successful pairing from two seasons ago. Ellis is coming off a 44 game stretch where his 0.73 points per game were the highest among Preds defensemen. While that pace may be difficult to maintain he looks to increase his numbers once again. Ekholm has consistently contributed point totals in the mid-30's despite seeing minimal power play time.

The Preds 3rd pairing will provide solid depth but minimal offensive contribution. Hamhuis is still a solid player but a lack of power play will limit his chance. Weber is a solid puck mover and should see an increase in scoring output with a full season and a consistent role. 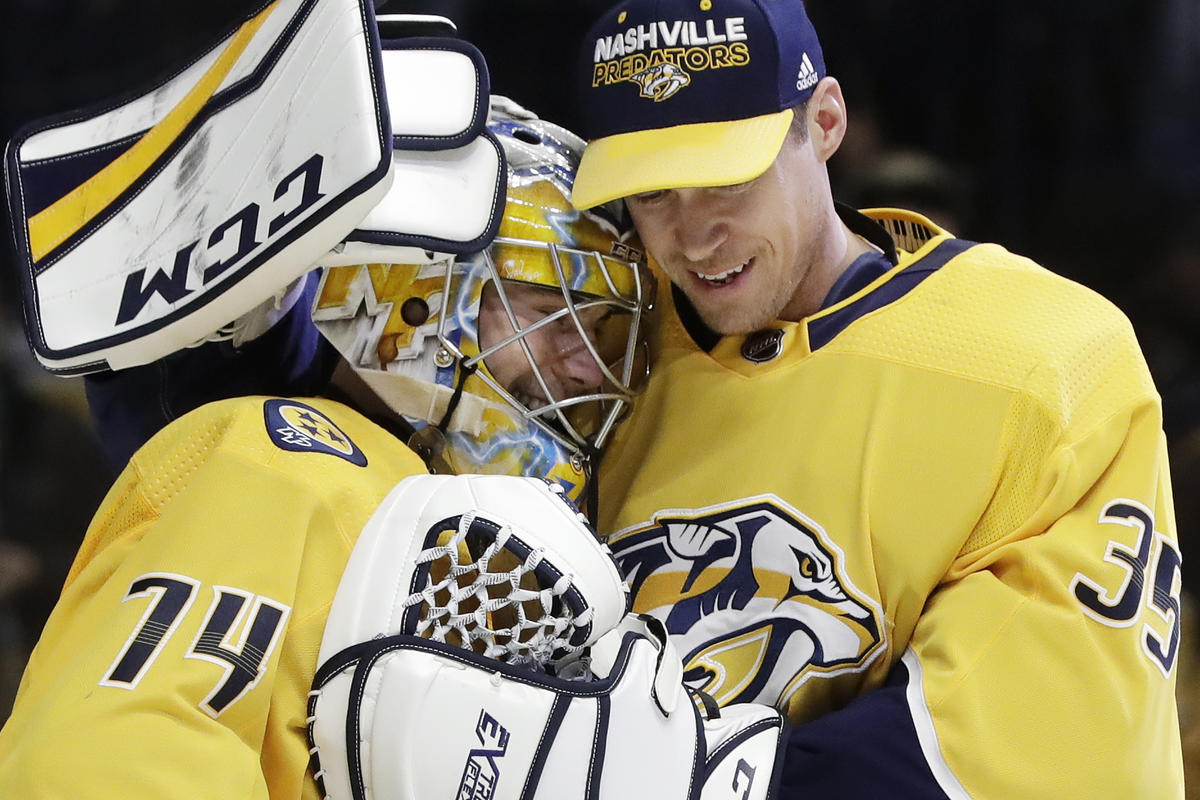 Rinne and Saros celebrate another victory

Coming off his first Vezina Trophy but a disappointing playoff run, Pekka will be looking to regain his high level of play from the regular season. Well into his mid-30's, Rinne has remade portions of his game to be more controlled in his movements and less aggressive on shooters to protect the far post. He also continues to be one of the best puck movers which has proven to be a weapon against teams that like to dump and chase.

Juuse Saros continues his ascent towards the starter's role with the Preds. After a shaky start to the '17-18 season, he was rock solid the remainder of the season providing 11 wins and putting Rinne under 60 starts for the first time since '13-14. A larger workload is on the horizon for the Preds to see what Saros can do with more starts.

Top to bottom the Predators ice an elite level roster worthy of inclusion among the best in the game. The forwards contain skaters of multiple skillsets who can all produce offense while the defense corps is the envy of the entire league. While Rinne is getting older, Saros just keeps improving and can take the pressure off Pekka against any opponent.

Where I'm probably right - Ryan Johansen: In his offseason interview with Adam Vingan of The Athletic, Johansen recognized that his playoff production (27 points in 27 games with Nashville) needs to show up more often in the regular season. Expect Johansen to have a chip on his shoulder from game one and re-establish himself among the top centers in the league.

Where I'm probably wrong - Eeli Tolvanen: The skills are evident for Tolvanen but his readiness is understandably in question. If he makes the roster he should see significant time in the top 6 but it is far from a guarantee.

Predictions can be messy but the beauty of it is that in just a few weeks we get to start finding out just how right or wrong I am!

Quoted statistics are courtesy of NHL.com, NaturalStatTrick.com and Corsica.Hockey