Expectations have been raised for Josi after last season, but given everything we've seen he should have no problem blowing those out of the water.

To say that Roman Josi had a fantastic season last year is an understatement. Not only did he obliterate his personal best in points, but he also represented his team in the 2014 Sochi Olympics while becoming a mainstay on the Predators' blue line.

As the season starts, Josi should see himself firmly slotted into the first pairing with Shea Weber, as well as playing some heavy power play minutes. He spent over 200 minutes on the man advantage a season ago, second only to the Captain.

Breakout on the Blue Line

Already a prized defenseman, Roman Josi took strides this season to cement his place on the Nashville blue line.

Breakout on the Blue Line

This season should give us a good idea where Josi is as a player. Given that he's only had three pro seasons, (one shortened by the lockout, the other his very  first) it's hard to gauge what's a trend and what isn't.

One thing to keep in mind: Josi skated the fifth most minutes of any defenseman last year, generally against the toughest competition the opponent had to offer. He'll almost certainly be doing that again. Nashville wasn't a very good possession team last year, but as you can see in the chart below, Josi skated heavy minutes and still performed better relative to his team. Not a ton better, but enough to promote optimism. 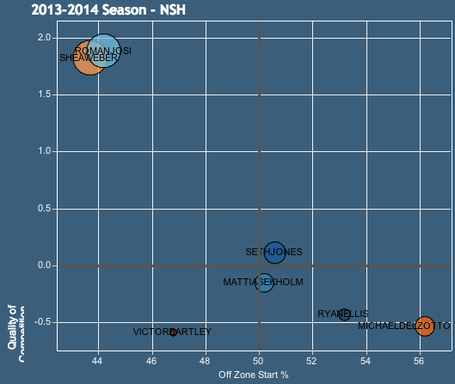 Nashville's overall possession game should improve with Laviolette behind the bench. (At least it better, if they want to have any success.) If Josi can do exactly what he did last year, he'll be one of the best players on the team. He may not be known for his offense, but was third in the league in 5v5 goals per 60 minutes among defenders that played at least 1000 minutes last year. We wouldn't mind him improving on his points per 60 minutes, though.

He builds off his impressive performance last year, scoring in the neighborhood of 50-60 points, while continuing to be a mainstay on the power play. Even gets some serious chatter about being a Norris Trophy dark horse. Josi would never get nominated, of course, but maybe one or two smart people give him a vote anyway.

Josi either doesn't mesh with the new coaching staff (hard to imagine) or, more likely, seriously regresses. Like the rest of the roster, he'll have to get used to transitioning into a high-tempo style of play. Given what he achieved last season, anything less than 40 points will be a huge disappointment.

Hammerhead shark. Often overlooked by the more fearsome and famous of its kind. Hawaiians consider the hammerhead the most respected species of shark, in addition to being "sacred guardians" of the ocean and their homes, both physically and spiritually.